Getting Started with Kubernetes on Docker Desktop

¿Having technical problems or want to give feedback on the experience? Send us you message and we will get back to you as soon as possible.

Questions on the lab material?

Go to the Docker forum , Docker community is there for you.

Docker Desktop is the easiest way to run Kubernetes on your local machine - it gives you a fully certified Kubernetes cluster and manages all the components for you.

In this lab you’ll learn how to set up Kubernetes on Docker Desktop and run a simple demo app. You’ll gain experience of working with Kubernetes and comparing the app definition syntax to Docker Compose.

Docker Desktop is freely available in a community edition, for Windows and Mac. Start by downloading and installing the right version for you:

Older operating systems can’t use Docker Desktop :( You can use Docker Toolbox instead, but that doesn’t come with Kubernetes - so you’ll need to run Kubernetes in Docker.

Kubernetes itself runs in containers. When you deploy a Kubenetes cluster you first install Docker (or another container runtime like containerd) and then use tools like kubeadm which starts all the Kubernetes components in containers. Docker Desktop does all that for you.

Make sure you have Docker Desktop running - in the taskbar in Windows and the menu bar on the Mac you’ll see Docker’s whale logo. Click the whale and select Settings: 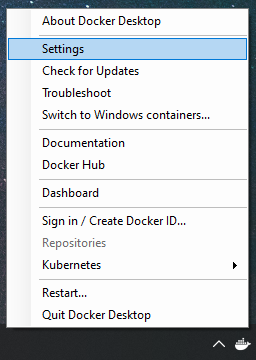 A new screen opens with all of Docker Desktop’s configuration options. Click on Kubernetes and check the Enable Kubernetes checkbox: 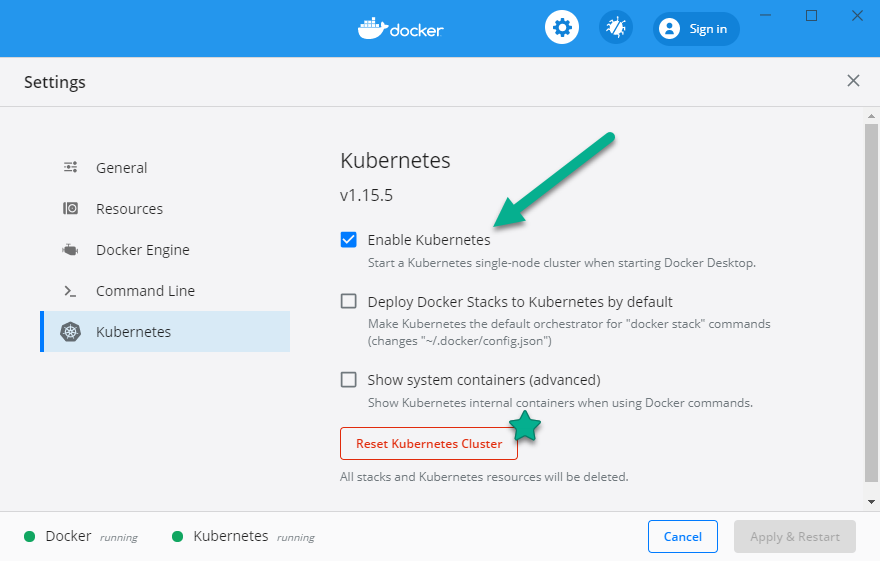 That’s it! Docker Desktop will download all the Kubernetes images in the background and get everything started up. When it’s ready you’ll see two green lights in the bottom of the settings screen saying Docker running and Kubernetes running.

The star in the screenshot shows the Reset Kubernetes Cluster button, which is one of the reasons why Docker Desktop is the best of the local Kubernetes options. Click that and it will reset your cluster back to a fresh install of Kubernetes.

If you’ve worked with Docker before, you’re used to managing containers with the docker and docker-compose command lines. Kubernetes uses a different tool called kubectl to manage apps - Docker Desktop installs kubectl for you too.

Check the state of your Docker Desktop cluster:

The Kubernetes components are running in Docker containers, but Docker Desktop doesn’t show them by default to keep things simple when you’re running docker commands.

and you’ll see zero containers (unless you have some of your own running).

And you’ll see a whole bunch of containers in the running state (18 on my machine), which are the various parts of Kubernetes.

It’ll take a couple of minutes for all the container images to download from Docker Hub and start up.

Kubernetes runs containers for you, so instead of explicitly running them with docker container run, you describe the desired outcome in a YAML file and when you run kubectl apply Kubernetes starts all the containers.

Containers in Kubernetes are wrapped in another object called a pod. Have a look at the pods for the voting app:

You should see lots of pods, with names starting db-, redis- etc. When the READY column says 1/1 for every pod, that means all the containers are running.

You can have many containers in one pod in Kubernetes, and they share the same network and compute environment. That lets you do very cool things with the sidecar pattern.

Browse to http://localhost:5000 and you should see the classic voting application: 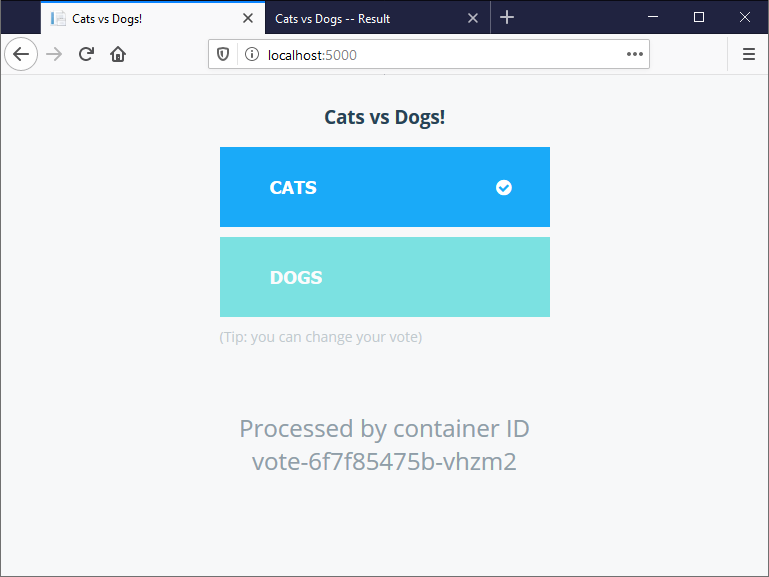 That’s a Python application running in a Docker container, being managed by Kubernetes. Click on Cats (or Dogs) and the app sends a message to the Redis message queue. That message gets picked up by a .NET worker application, which updates a Postgres database.

Browse to http://localhost:5001 and you’ll see the results: 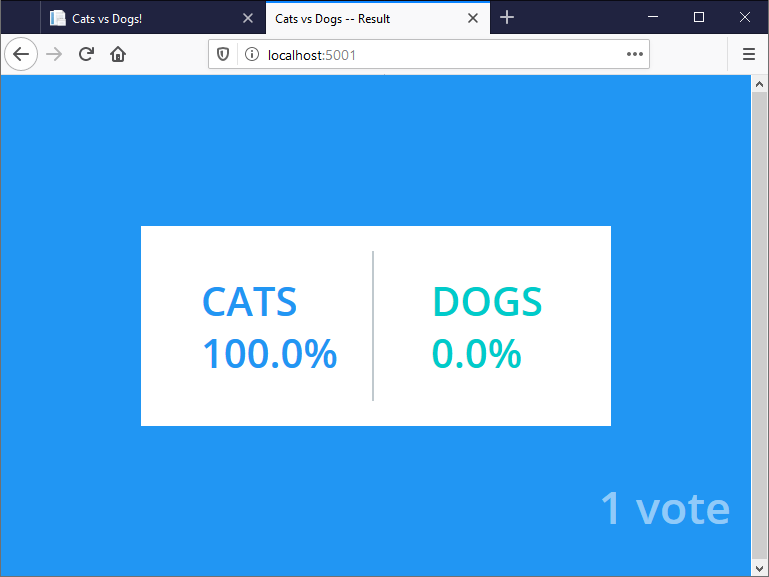 That’s a Node.js app which reads the data from Postgres. Everything is running in containers through Kubernetes.

Kubernetes makes sure containers are running to keep your app at the service level you requested in the YAML file. They’re all Docker containers which you can also manage with the docker command line.

Print the container ID for the result app:

And now remove that container:

Check back on the result app in your browser at http://localhost:5001 and you’ll see it’s still working. Kubernetes saw that the container had been removed and started a replacement straight away.

And you’ll see it’s a new container. Kubernetes makes sure the running app always matches the desired state in the application YAML file.

This was a simple introduction to Kubernetes, and there’s an awful lot more to learn. The example app is a good place to explore, you can read up on services, volumes and namespaces - they’re all used in this app.

If you want to learn more, check out:

Docker Desktop has a feature to tear down your whole Kubernetes cluster and reset it to the original state. Open the settings from the Docker whale icon and click Kubernetes. Click the Reset Kubernetes Cluster button and the demo app will be gone.

What does Kubernetes do? Select only one option

How do you work with the Kubernetes API? Select only one option

How does Kubernetes group containers together? Select only one option

Congratulations! You've earned a badge for completing this exercise. Share your achievement on your social network and then select CLOSE to return to the 7th Birthday Challenge page.

First time here? Take a short tour through Labs platform and learn how to use the new features.

You will find the Lab’s content index on the menu. Also, look for the option "help" in the menu if you experience any problem, want to send us feedback or just need advice from your peers.

On the upper right corner, you will find the dark mode switch and the option to change the font size. Also, you will see the icon to import files from your local computer.

You will see you Lab’s progress on a green bar, located on the top left side of your window.

You'll be able to maximize your terminal by clicking on the icon you have on the upper right side.